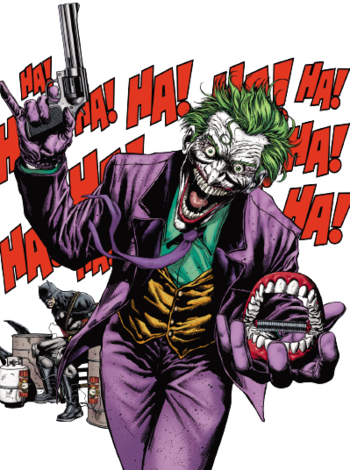 Everything burns.
"You're looking at it rationally - there are people who are useful to you, and people who ain't, and the people who ain't got to go. Me, I'm not rational. I don't care if you're useful or not. I feel like taking you out, Devo, so that's what I'm doing."
— Trevor Phillips, Grand Theft Auto V
Advertisement:

One of the nine alignments from the best-known Character Alignment system. If Chaotic Neutral is the truly free spirit, Chaotic Evil is the truly free evil spirit. Whereas the Chaotic Neutral character is just concerned with his own freedom but doesn't seek to hurt others, the same cannot be said for Chaotic Evil characters. They take pleasure in hurting others and will do whatever they want whenever they want to do it, which, seeing as they are evil, usually entails lots and lots of death and destruction. These characters are usually the most aggressive of the Evil alignments, more often than not being possessed of an impulsively violent nature and a total disregard for people, laws, or even the world around them. In short, Chaotic Evil represents the destruction of not only life and goodness, but also the order upon which they depend. This makes Chaotic Evil, potentially, the most terrifying evil to fight because it's so unpredictable and often incomprehensible to most, lacking the order and rules of Lawful Evil, or the inherent yet understandable selfish pragmatism of Neutral Evil.

Chaotic Evil is probably the hardest alignment to depict sensibly. Far too many people assume that Chaotic Evil means a babbling lunatic incapable of walking through a village without inducing wanton, meaningless slaughter and destruction. "Chaotic Evil" does not mean the most evil or stupid, in it For the Evulz (which can be a motivation to any villain of any Evil alignment), nor even psychotic.

The least dangerous (well, the bottom-rung at least) character of this alignment is the unwilling Mook — they hate their master, they hate taking orders, and they enjoy their job but not the fact that it is a job; they'd have a lot more fun causing all that terror and discord for free, and they only behave mainly out of the fear of punishment. The most dangerous character of this alignment, on the other hand, is undoubtedly The Chessmaster mixed in with Omnicidal Maniac, with his cruel calculation and intelligence and the will to use it in the most horrible ways. When these types do come up, being Chaotic, they tend to specialise in the Xanatos Speed Chess variation, excelling at adapting plans as events unfold rather than having every contingency prepared ahead of time.

Not to be confused with Always Chaotic Evil, which is about an entire race falling under any of the Evil alignments.

If you have a difficulty deciding which alignment an Evil-aligned character belongs to, the main difference between Lawful Evil, Neutral Evil and Chaotic Evil is not their devotion to their evil wishes, but what methods they believe are best to realizing it: Archetypes that are particularly prone to being Chaotic Evil include:

A Chaotic Evil character is perfectly willing to work for or with another individual or group, even of a totally different alignment, if it gives them an excuse or licence to behave the way they want to — the distinction between this and Neutral Evil lies in the nature of the behaviour and how far and how frequently they push the limits that the job description permits (if such limits exist). Characters such as the Magnificent Bastard, The Dragon or Big Bad, The Chessmaster or Psycho for Hire etc. will all vary between Lawful Evil, Neutral Evil, and Chaotic Evil — if a character has Undying Loyalty to a villain or is willing to obey orders but is otherwise drowning in Chaotic Evil motives and/or behaviour, odds are they are still Chaotic Evil.

Chaotic Evil characters can actually rule over people (since they only care about their own freedom), but it typically takes the form of "Do whatever the heck I say NOW!". The Omnicidal Maniac can be of any alignment, and chaotic evil characters are, on average, only likely to fall into that behaviour when they are bored or if they are a Straw Nihilist — plenty of others believe in Anarchy Is Chaos or even just mundane evil behaviour that does not operate on that scale.

Not to be confused with Chaos Is Evil, though due to that trope Chaotic Evil is often thought of to be the most evil alignment, despite Dungeons & Dragons being consistent all evil alignments are just as bad.

When dealing with the examples of specific characters, remember that assigning an alignment to a character who doesn't come with one is pretty subjective. If you've got a problem with a character being listed here, it probably belongs on the discussion page. There will be no Real Life examples under any circumstances; it just invites an Edit War. Plus, real people are far too complex and multi-dimensional to really be classified by such a straightforward alignment system.
On work pages: Character Alignment is only to be used in works where it is canonical, and only for characters who have alignments in-story. There is to be no arguing over canonical alignments, and no Real Life examples, ever. Its subjective nature makes it very good kindling for a Flame War.

One wonders why anyone would elect Richard Nixon in the first place. Then again...

One wonders why anyone would elect Richard Nixon in the first place. Then again...