Literature / What Madness is This? 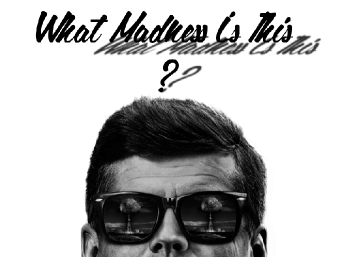 There is no hope. Only Oswald.
"What Madness Is This? That brother might fight brother, and father might fight son? That countless homes and families be ripped asunder all for the sake of their piece of dirt? of their political party? Why must we hate each other so?"
—Thomas Jefferson
Advertisement:

"What Madness is This?" is a dystopian Alternate History timeline by Napoleon53, a member of AlternateHistory.com. It can be read here

. It starts with the corrupt dealings of the American Federalist Party, whose attempts to gain supreme power lead to the collapse of the United States. Meanwhile, in Europe, Napoleon has defeated his enemies and stands as master of the continent.

Things quickly take a turn for the worse and never look back. We witness the rise and fall of the fascist Republican Union: the northern successor to the United States, the RU's rivalry with the democratic Southron nations of Maryland, Virginia, Georgia, and Carolina—and see the development of a world that is very different yet frighteningly similar to our own.

The story "ended" with a massive nuclear war, but Napoleon53 has done an "alternate ending" where the Republican Union's successor—the New United States—doesn't fall apart and goes on to finally conquer the Caribbean and the remains of the Southron nations. This is still ongoing, but it looks like things aren't going to get any better and will probably get worse.

In September of 2018, the timeline was rebooted by Napoleon53, with the story and characters essentially the same but with new forms of update added on. The new thread can be found here

, and their page can be found here.