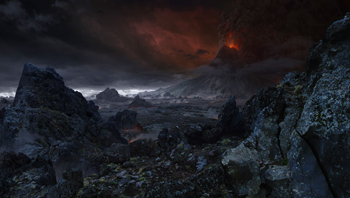 Surprisingly gentle on your allergies, though.
"One does not simply walk into Mordor. Its black gates are guarded by more than just orcs. There is evil there that does not sleep, and the Great Eye is ever watchful. It is a barren wasteland, riddled with fire, ash, and dust. The very air you breathe is a poisonous fume. Not with ten thousand men could you do this. It is folly."
— Boromir, The Lord of the Rings: The Fellowship of the Ring
Advertisement:

Mordor is a black and bleak type of shadowland. The sun is always hidden behind endless dark storm clouds. What little vegetation there is (if any) will be withered and rotting or mutated into an "evil" variety that's covered in sharp thorns and/or liable to eat people. Poisonous marshes and swampland are also quite common. Expect frequent volcanoes and/or ice storms. May contain the ruins that show that once people had lived here. It may even be an Eldritch Location, defying the laws of nature (and most Eldritch Locations are Mordor).

In a Fantasy Setting, Mordor is often this way because the evil of the Big Bad who rules the place radiates throughout the land, or because his Black Magic acts as a Curse on it. Often, this land was once a beautiful place before the Big Bad got hold of it, and it's presented as a stark example of what could happen to the hero's world should he or she fail in stopping the Big Bad. Should the Big Bad be defeated and the good king restored, often the skies will clear up and the birds and bees and flowers will return at warp speed.

It's not clear how anything can survive in Mordor for any extended period in time. Perhaps everyone lives Beneath the Earth and eats mushrooms (or people who wander into their land), or else all their resources come from conquering others. Or maybe they are demons or The Undead, who don't need to eat. Even if not, expect its inhabitants and vegetation to be part-monster as a result of adapting to survive the conditions there, or being twisted by whatever evil resulted in Mordor's creation.

In a videogame, it's usually featured at the end of the game.