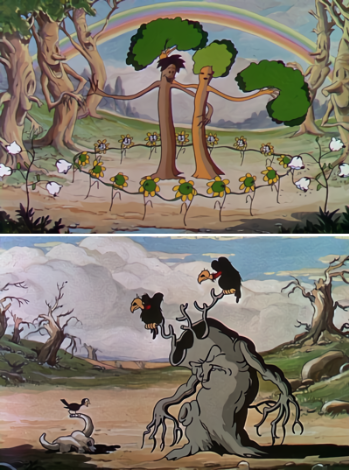 In fiction, especially in visual media where Black-and-White Morality is in play, it's very common for the home bases of the heroic and villainous factions to be easily distinguished by the way they reflect their inhabitants' morality and philosophies.

Typically, the heroes will live in lovely, peaceful settings bursting with life. These may include rural, pastoral arcadias, peaceful wildernesses, well-kept, clean and bustling settlements, shining castles, and the like. Plants and animals thrive, the sky is bright blue and things like poverty, refuse and the more unpleasant sides of civilization all seem blissfully absent.

The villains, by contrast, will all live in godforsaken wastelands barren of any green life, often little more than stretches of sand and rock surrounding the villains' ominous base. If anything can be found here besides the villains themselves, the local life is typically dominated by monsters, leafless trees, and traditionally reviled animals such as vultures and rats. When these areas aren't good old-fashioned deserts, expect to find copious amounts of pollution, refuse, and sprawling, chaotic urban growth to contrast the heroes' cleaner and lusher homes. If the sky isn't always dark or overcast, it'll often be a sickly yellow or an ominous red.

Sometimes, it's established as a motivation for the bad guys to embark on that war of conquest in the first place: The others have better land, let's take it.

One corollary is that, should the bad guys be able to take over the good guys' territory, the heroic arcadia will shift to match the villains' own landscaping preferences. Sometimes this will be explained or justified on-screen, such as through the effects of pollution, warfare, or urban neglect. Sometimes this will happen for no particular reason, with the land withering and the sky changing color as soon as the villains move in.

See also Arcadia, for depictions of idyllic pastoral lands in general. For a more extreme version of the first half of this trope, see Mordor, where the land is outright evil, hostile, and corrupted as opposed to just barren, ugly and inhospitable. If this appears in video games, expect the Sorting Algorithm of Threatening Geography to apply — generally, the game will start in the pleasant heroic lands (typically represented as a Green Hill Zone) before moving into more villainous levels (the Lethal Lava Land, Eternal Engine, and so on).

Compare Sensible Heroes, Skimpy Villains and Good Republic, Evil Empire. This trope may come into play in works centered around Dreams vs. Nightmares. This can overlap with Fisher King when a specific land shifts between Arcadia and Badlands based on the personality of who rules it. For the same basic concept applied to individual characters, see Beauty Equals Goodness. Subtrope of Shadowland.