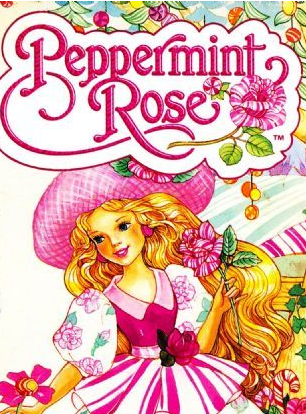 Sunshine, rainbows, a breeze that gently blows...
A garden filled with magic, the home of Peppermint Rose...
Advertisement:

Peppermint Rose was a series of candy-scented dolls created by Mattel and Those Characters From Cleveland in 1992, including Peppermint Rose, Lemon Kiss Lily, Merry Mint Violet, and Miss Vanilla Daisy. In conjunction with the dolls, a 24-minute TV special was made to introduce the characters and setting.

The special is an Origins Episode, detailing how Peppermint Rose started out as just Rose Richards, a normal teenager with an attitude problem who suddenly found herself recruited by a dragon named Petalpuff and a wizard named Brother Diminutive (Dimi for short). In the land of Peppermint Rose, the titular rose helps keep the land and all its flowers alive, but it was stolen by a group of ogreish beetles from the land of Bugoonya, who plan to feed the rose and all the other flowers to their Queen, Beeteelya.

Dimi couldn't stop them on his own, so he turned to the moon and its Maestro, Lunabright, who instructed him to nurture a rose and awaken its potential—he was expecting a flower, but Petalpuff brought back a girl. Rose isn't pleased at all about hearing she has to save the land, nor is she pleased when Dimi casts a spell to make her talk like an animal whenever she acts out of line. Rose is given armor and a wand, and with the help of her friends Daisy, Lily, and Violet, it's up to her to save the land from Queen Beeteelya.

The special is long out of print, but can be seen in two