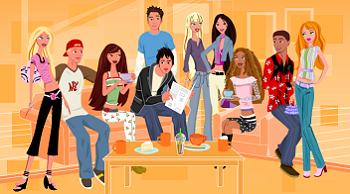 My Scene is an American series of fashion dolls created by Mattel in 2002. Mattel's Barbie character is one of the dolls in the My Scene line, and the My Scene dolls have slim bodies similar to earlier Barbie dolls, but with larger heads. The New York Times described their features as "exaggerated lips and bulging, makeup-caked eyes." My Scene were designed to appeal to the tween market and compete with the Bratz dolls from MGA Entertainment. The series originally consisted of three female characters, but was expanded to eventually include ten different dolls.

The My Scene series of dolls was first introduced in the fall season of 2002, before the 2003 Flavas (which was a flop), to compete with the Bratz dolls. It included three dolls: Barbie, Madison, and Chelsea, with different ethnicities and personalities, and 2 extra fashions for each character. The characters were named after different locations in New York City. Originally, the series consisted of three female characters, Chelsea, Barbie, and Madison, but more girls were eventually added.

By the beginning of 2003, one more was in production: Nolee, and three male characters, Bryant, River, and Hudson. Delancey and Ellis premiered in the "Hanging Out" range which debuted in late 2003. Kenzie debuted in the "Getting Ready Line" of 2004 and Nia debuted in 2008. There are seven characters in the My Scene series (Kennedy, Madison, Chelsea, Delancey, Nia, Hudson, and River), six discontinued characters (Barbie, Nolee, Kenzie, Bryant, Ellis, and Sutton) and four special edition dolls (Lindsay, Jai, Tyson and Ryan). Each of the My Scene girls (and three of the boys) own pets.

A web series was available on the website, along with two direct-to-video specials, Jammin' in Jamaica and Masquerade Madness, and a full-length movie, My Scene Goes Hollywood.

The line was officially discontinued in 2011, though the website wasn't completely shut down until 2014. There were rumors of the My Scene-line making a comeback in 2016, but these were eventually proven false.

My Scene contains examples of: