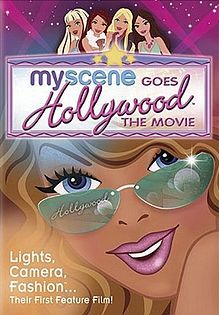 My Scene Goes Hollywood is a Barbie direct-to-DVD movie which as based on the My Scene sub-playline. It was the third and final animated production in the franchise, and the only one that was full-length.

Barbienote who would later be replaced by Kennedy in the toy line., Madison, Chelsea and Nolee are four New York highschoolers. During their summer vacation they're visited by Delancey, Chelsea's cousin. One day they find themselves walking around a movie set when they visit their favorite cafe, The Dish.

They all pretend to be extras on the set and find themselves with a (small) part in the movie, but Madison finds herself playing a main character after the actress who was supposed to play her breaks both legs while rollerskating. Getting a bigger and bigger head and not hanging out with her friends, Barbie confronts her and Madison is forced to make a decision, her normal friends or her new celebrity friends.

My Scene Goes Hollywood provides examples of the following tropes: