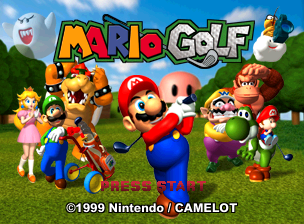 The Mario gang takes a break from bickering with each other and putter up.
"Spinoff"! Is there any word more thrilling to the human soul? Hi, I'm Troy McClure. You may remember me from such TV spinoffs as Son of Sanford and Son and AfterMannix.
— Troy McClure, The Simpsons, "The Simpsons Spin-Off Showcase"
Advertisement:

Spin-Offs are when part of a successful show, usually characters, but sometimes a general concept (first you have the Law, then you have the Order), are taken and given a second show of their own.

From a producer's perspective, it's a chance to explore other aspects of a concept. Actors can find opportunities to grow in their craft, as well as rise in importance by moving from just being part of an ensemble to having a show built around them. For the networks, it's a chance to establish a show with a built-in audience, making it that much easier for them to sell advertising.

Lots of spinoffs go on to be successful shows in their own right, sometimes even surpassing the parent series in popularity. Others crash and burn (Joanie Loves Chachi, anyone?), suggesting that there is no such thing as a sure thing. Nevertheless, networks keep trying them.

There are many different kinds of spinoffs, including:

Spinoffs are Older Than They Think. The character of Falstaff, from Henry IV parts 1 and 2, was given their own play, at Royal request, by William Shakespeare.

See also Distaff Counterpart. When a TV series is successful enough to produce a film Spinoff, this is The Movie. Video Game spinoffs often feature the same cast but differing gameplay genres or are Gaiden Games starring one of the secondary or side characters. When the spin-off focuses on the descendant of a character from a previous installment, it's a Spin-Offspring. If the spin-off reimagines the characters as little kids, it's a Spin-Off Babies.

In the television industry, there is a technical difference between the terms "spinoff" and "sequel": a "spinoff" refers specifically to a television show that continues in (more or less) the same era as its predecessor, while a Sequel Series takes place after the parent series' setting. (Some older sources will also freely use "spinoff" for any mass-produced merchandise connected to a piece of media, from videogames to underpants; more modern terminology will usually favor "tie-in" for that,)