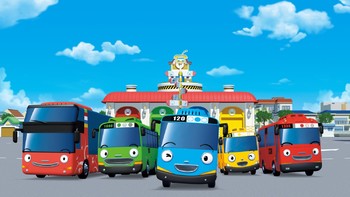 "With his friends by his side, Tayo's always having fun!" Now it's in your head. You're welcome.

A South Korean kid's show about a bus named Tayo and his friends. It is so popular in its home country that the South Korean government turned real city buses into characters from the show

in order to teach kids how to ride the bus. Human characters play a large role in-universe, both as friends and riders of the buses.

Has a Character Page that definitely needs some Wiki Love!