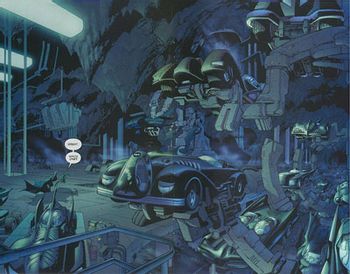 "We'll take The Car."
"I must congratulate you, sir. You dynamited an entrance through a hundred feet of shale. Carved a flight of steps from solid stone. And all to create for yourself a rather remarkable... garage."
— Alfred Pennyworth, Detective Comics #0 (1994)
Advertisement:

Does the hero have a Cool Car? Then the hero needs a garage — and not just any garage would do. It has to be a cool garage that is up to the car's level. It's only fair. It may even come with its own resident Gadgeteer Genius to serve as a mechanic, if the Cool Car is so advanced that the hero cannot work on it himself.

The garage equivalents for other modes of Cool Transportation, such as a Cool Plane's hangar, also qualify if they fulfill the "as cool as the vehicle it houses" criterion.

Some people attempt to build these in Real Life, in which case it may be referred to as a "Man Cave."