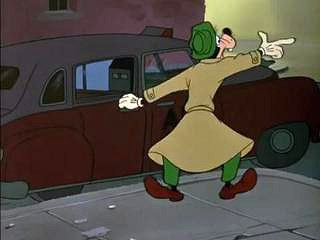 "Taxi! Follow that car!" [cab drives off without him] "Keeps 'em on their toes!"
— Daffy Duck, The Great Piggy Bank Robbery
Advertisement:

The villain speeds off in a car. The hero, close behind, flags down the nearest taxi, gets in, and, pointing at the car, says "Follow that car!". And thus, the Chase Scene begins. This is an alternative to Flashed-Badge Hijack, available to civilians as well as the police.

If the villain anticipates the hero trying this, expect the cabbie to be Not My Driver.

This is a Discredited Trope or even a Dead Horse Trope. Sometimes it's a case of I Always Wanted to Say That. "Car" may be replaced with another vehicle: "Follow that space ship!"

A common subversion is for the speaker to make the mistake of saying this before they get in, and the cab taking off without them.