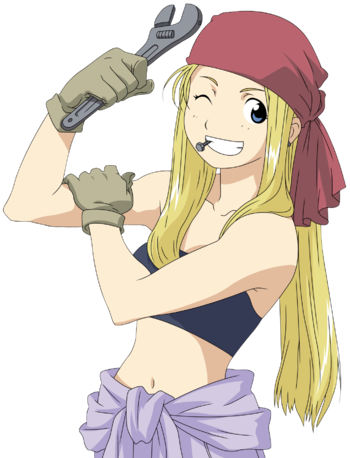 Mechanical inclinations have traditionally been the forte of men, but the Wrench Wench is a girl who proves the former idea is definitely wrong. She will always be skilled and confident about her own work, as well as Curious as a Monkey in the presence of new and interesting machines - or Constantly Curious, if inspection is impossible. She is usually self-confident enough to not need a Beautiful All Along plot, but will probably have at least one She Cleans Up Nicely moment, even though she is often an Unkempt Beauty anyway.

Often a Ms Fix It and The Blacksmith, a Wrench Wench might have Machine Empathy and can diagnose problems just by listening to the motor. Her tools extend to pure electronic devices, but she is also likely to be found with a blowtorch and ratchet set. When her talents go beyond mere fixing things to outright creating machinery, she is a Gadgeteer Genius. If it is computers and the Internet instead of mechanics, she is a Hackette. If her skills wax more technical than mechanical, chances are she is a Hot Scientist, though overlap can exist when dealing with things like mecha and androids which encompass both elements.

Contrast to Science Hero's Babe Assistant, who is much less technically competent. The Hood Ornament Hottie is a related trope, where the woman may be dressed or posed as if she was the mechanic, but actually is simply intended to be Eye Candy. However, a genuine Wrench Wench is equal to The Engineer. In a fantasic media, she will be a Science Hero.