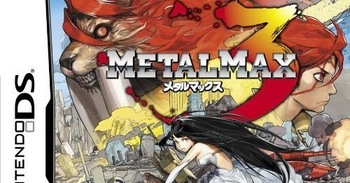 The third entry in the main Metal Max series. Released in 2010, it is the first numbered entry in the series in 17 years after the release of Metal Max 2 for SNES in 1993. The first game to introduce the job system and give players freedom to create party members of their choice aside from the protagonist. The remake of Metal Max 2 called Metal Max 2: Reloaded was released a year later utilizing this game's engine and several refinements were given to make the overall experience even smoother.
Advertisement:

The main character is an amnesiac hunter who just got revived from death by the series' staple Dr. Minche. Deciding to travel around the world as a bounty hunter in hopes of regaining his memories, he soon gets wrapped up in the conflict involving the Coldblood Clan that terrorizes the region and Cola, the daughter of the ruler of the city Shelter.

Although the game suffered No Export for You, it was translated in English by Metal Dreamers in 2020.

Tropes applicable to Metal Max 3 include: