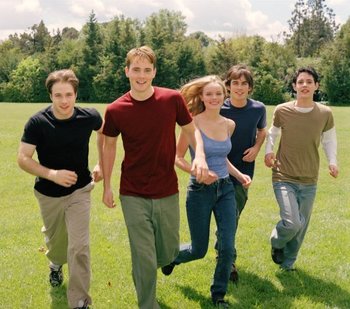 "They're very strange,"
"No, I think they think we're strange,"
—Hamilton and Jake
Advertisement:

Young Americans is a short-lived series by The WB. It is a Spin-Off of Dawson's Creek made in 2000 by the WB. It only lasted a season of eight episodes. There was a large fan effort to get the WB to re-commission a second season, which failed.

The series is centered around the prestigious Rawley Academy which is situated in the poorer small town Rawley. The main characters are Will Krudski (Rodney Scott), who entered the academy through a forged entrance paper and is of questionable background, and maybe half-siblings Scout Calhoun (Mark Famiglietti), a Rawley student, and Bella Banks (Kate Bosworth), a townie. Will narrates the start and finish of every episode. However, sub-plot characters Jake Pratt (Katherine Moennig), Hamilton Fleming (Ian Somerhalder), and Finn (Ed Quinn) become more prominent as the series continues, Hamilton being the son of the dean and the art teacher, Jake being a Sweet Polly Oliver in a Boys school to see if her mother would notice, and Finn being a coach of the rowing team.