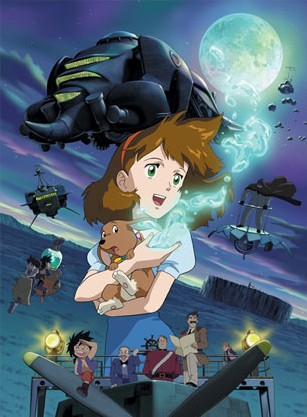 Jane, holding her dog Comet and some of this titular cerulean sand.
Advertisement:

Patapata Hikōsen no Bōken, or Secret of Cerulean Sand, is a 2002 Japanese / Korean co-production and lasts 26 episodes.

This is not Nadia: The Secret of Blue Water, though they share much in common as far as characters and plot points.

It takes inspirations from the novels Face au Drapeau ("Facing the Flag") and L'Étonnante Aventure de la mission Barsac ("City in the Sahara"), both written by Jules Verne.

The mother of Georges and Jane Buxton died while giving birth to them, and her father was remarried three years later to Margaret, who already had a son named William, then 11-years-old, who come to the Glenar Castle, where the family now lives; he then proceeds to have it in for everywhere in Glenar, apart from Jane.

One day, Georges hears talk of Azurium - a mysterious cerulean sand with the ability to enable flight. He goes to the University to discuss this discovery with several scientists, but no one believes him, with the exception of Christopher Barsac.

In a separate event, Lord Buxton learns that William has embezzled money from the bank, and Georges is invited participate to an expedition led by the Prof. Barsac to the countries from which Azurium originates.

Several weeks after, a letter arrives at Glenar telling Georges was shot for treason.

Bad things then begin to happen: the Buxton Bank is robbed and stricken ill by this long suite of misfortunes, Lord Buxton is bedridden.

One day, Jane receives a letter containing some this mysterious sand and decides to mount an expedition to rescue her brother, whom she now believes to still be alive...