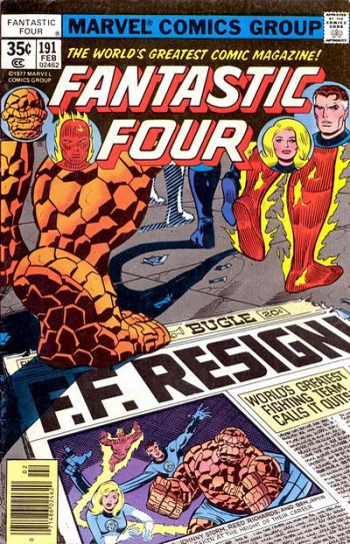 After several internal problems, the Fantastic Four resigned, and each one took their own career. Of course, they reunited some time later.
Legolas: Hurry! Frodo and Sam have reached the eastern shore.
[Aragorn stands still and says nothing.]
Legolas: You mean not to follow them?
Aragorn: Frodo's fate is no longer in our hands.
Gimli: Then it has all been in vain! The Fellowship has failed.
Aragorn: Not if we hold true to each other. We will not abandon Merry and Pippin to torment and death. Not while we have strength left.
— The Lord of the Rings: The Fellowship of the Ring
Advertisement:

Our heroes are a force of nature. United, there is nothing in this world that can stand against them. Divided is another story.

Whether due to a plot device, a scheme by the villain, or internal strife, the heroes separate. They may be scattered all over the world, they may just go their separate ways, but the point is they are no longer a team. It may take multiple story arcs to get them back together. They may never get back together and even if they do, their separate adventures and tribulations will have caused them to change and drift apart in ways they could not have foreseen.

Most groups would never do this willingly because you Never Split the Party. When this happens, expect it to be the Darkest Hour, and expect the episode where this happens to be a Wham Episode.

Note: For it to count as this trope, it should be a whole arc, not just one or two episodes. If just one character leaves, or it lasts for a very short time, it falls under other tropes.

Compare Let's Split Up, Gang!, where the party temporarily splits up to tackle a problem, Party Scattering and Involuntary Group Split, where they are split up involuntarily and sent on Solo Sequences by an external force, and The Fellowship Has Ended, where the split-up becomes permanent.

Not Friends in the Future

In the future, the Stump Trio and Omar go their separate ways six years later and their friendship drifts apart, but J.P. and Omar still remain close friends.

Not Friends in the Future

In the future, the Stump Trio and Omar go their separate ways six years later and their friendship drifts apart, but J.P. and Omar still remain close friends.