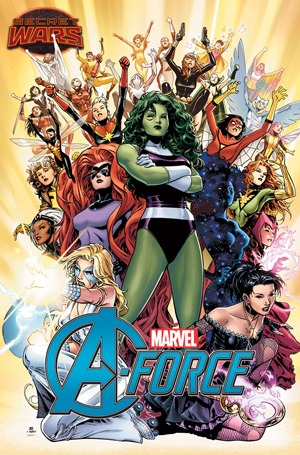 The A probably stands for Action Girl.
Advertisement:

A-Force is a Marvel Comics title following an all-female super team spun-out from The Avengers.

Originally conceived as a limited series tying into 2015's Secret Wars, the first volume of A-Force was written by G. Willow Wilson (Ms. Marvel) and Marguerite Bennett (Angela), with Jorge Molina on illustration duties. During this brief run of issues, A-Force was introduced as the peacekeeping squadron of Arcadia, a "feminist paradise" that existed on Battleworld. When one of their own is unfairly banished by God Doom, team leader She-Hulk resolves to make things right, all the while uncovering a conspiracy about the world they inhabit.

With the second volume —this time set in the All-New, All-Different Marvel universe— A-Force has never existed, prompting Singularity (a cosmic being who met them on Battleworld) to reunite with her new friends — despite none of them having any memory or knowledge of the reality she used to know. Kelly Thompson (Jem & The Holograms) and Ben Caldwell assume creative duties, following the original team's departure.

Each member covers unique corners of the Marvel Universe note She-Hulk for The Avengers, Medusa for The Inhumans, Dazzler for the X-Men, Nico for mystic Marvel, Singularity for cosmic Marvel, including: