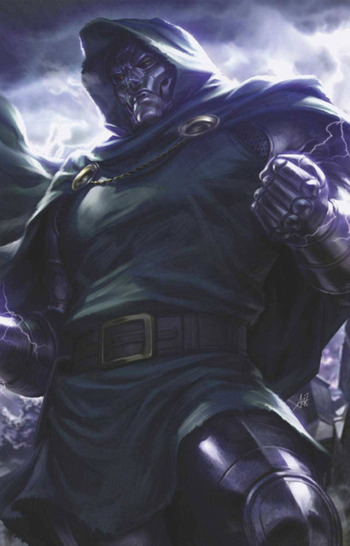 Click here to see him as The Infamous Iron Man 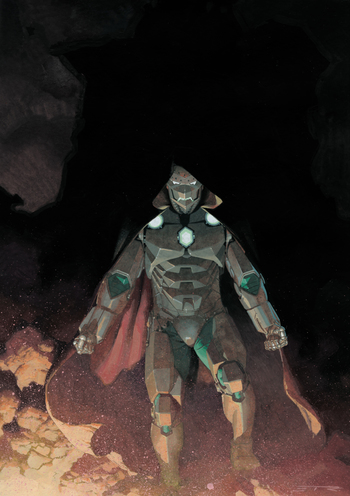 "I am Doom... Destroyer of worlds... What gods dare stand against me?"
— Doctor Doom, FF Vol. 1 #13, written by Jonathan Hickman
Advertisement:

Starting from The Amazing Spider-Man #5 however, Doctor Doom began appearing in stories with other heroes, because of both his considerable popularity and his versatility. As many writers and fans note, Doctor Doom's rich character and complex origins allow him to fit in, and play off, almost any genre and against any hero. As such he's been consistently a Marvel-wide villain from his inception, making notable appearances as a villain and Foil for the likes of The Avengers, X-Men, Spider-Man, the Hulk, Iron Man, Doctor Strange, Thor, Luke Cage, Squirrel Girl and more. He is a unique figure who can inhabit multiple corners of the Marvel Universe whether it be the mystical side, the cosmic side, the political-national side, and even the street-level. Dr. Doom can slip in almost any genre and any hero's story no matter the power level and you can always find a good reason to work him in. 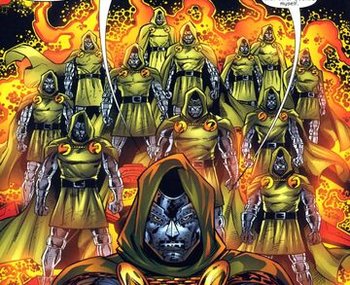 The Doombots are robots created by Doctor Doom (above). Usually show up singly to impersonate Doom but are sometimes used in multiple numbers as armies for Doom.