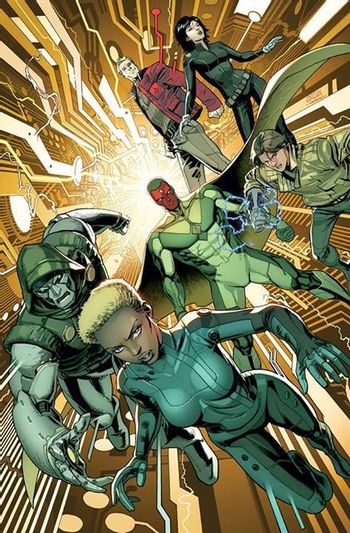 At the end of Age of Ultron, Hank Pym created a virus which would supposedly destroy Ultron once and for all, which constantly regenerated and adapted faster than Ultron could deal with it. However, within days, this virus quickly develops intelligence and multiplies, forming an entire community of artificial intelligences. Some of these new A.I.s, led by a being known as Dimitrios, want to annihilate humanity, so to fight them on a level playing field, Pym brings together Victor Mancha, The Vision, and a modified Doombot to form a new team of Avengers. Together with Alexis, an amnesiac machine who is connected with Dimitrios, the team tries to find a way to allow humanity to coexist with this new form of life.

Tropes found within Avengers A.I. include: