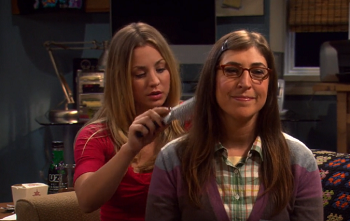 "One of the great joys in life is having one's hair brushed."
— Claire Smith, Letters to Juliet
Advertisement:

A good way to show that two characters are close is to let one of them have her (and usually, it's her) hair combed or brushed by the other. Typically, the one who brushes the other's hair also arranges it into a simple or elaborate hairstyle. As this is something usually done to young girls by their parents, it's often used to illustrate a bond and an affectionate relationship, often a motherly or sisterly one.

If the girl or woman getting her hair brushed has been shown as uptight or withdrawn before, this goes hand in hand with Letting Her Hair Down. If the context is romantic and the bond is not a platonic one, the moment can lead to a kiss (or more).

For animals and especially cats, licking and grooming their fur is an equivalent used to show that the characters care for each other and that they are intimate and affectionate.

Intimate Haircut is a related trope, because if not done by a professional hairdresser, cutting someone else's hair is seen as an intimate act and bonding experience. Ear Cleaning is a similar concept: if a character lets anyone else clean their ears, it's an indication of a close, warm and trusting relationship.

Emira is shown brushing Amity's hair at the end of the episode while giving her some sisterly advice.

Emira is shown brushing Amity's hair at the end of the episode while giving her some sisterly advice.