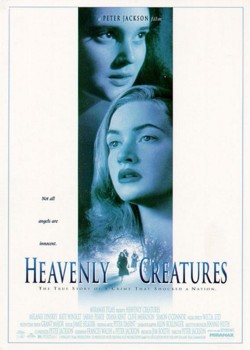 "'Tis indeed a miracle, one must feel... That two such heavenly creatures are real."
Advertisement:

Heavenly Creatures is a 1994 film by Peter Jackson, and most notably the first film of both Kate Winslet and Melanie Lynskey.

Set in Christchurch, New Zealand, in the early 1950s, the story is narrated by 14-year old Pauline Rieper (Lynskey) through her diary entries.

Pauline Rieper is a bright, imaginative, but gloomy girl, traits that set her apart from both her salt-of-the-earth working-class parents and her run-of-the-mill schoolmates. Enter Juliet Hulme (Winslet), a New Transfer Student from England, born to a wealthy, glamorous, intellectual family—everything that Pauline dreams of for herself.

Bonding over their childhood ailments, their feelings of superiority and loneliness, and their shared imaginary fantasy kingdom, Pauline and Juliet quickly become inseparable. Both the fantasies and the friendship sustain the girls during a tumultuous year in which Pauline's already rocky relationship with her mother steadily declines, Juliet's health issues threaten her life, and the Hulmes' marriage teeters on the brink of divorce. With their worlds falling apart around them, Pauline and Juliet seem to withdraw not only from their families, but from reality itself, falling into fantasies in which they escape to The Fourth World, a Personalized Afterlife of "music, art, and pure enjoyment" occupied by their hand-selected "saints" and accessible to only an elite few "heavenly creatures"—such as themselves.

Alarmed by the changes the intense friendship has wrought on their daughters, the two sets of parents agree that it would be best to separate them, with Pauline's mother appearing to be the ringleader behind the plot. Juliet will be sent to live with relatives in South Africa, and Pauline, unable to obtain a passport without her parents' consent, will be left behind. But on the eve of Juliet's departure, Pauline comes up with the perfect plan to stay together.