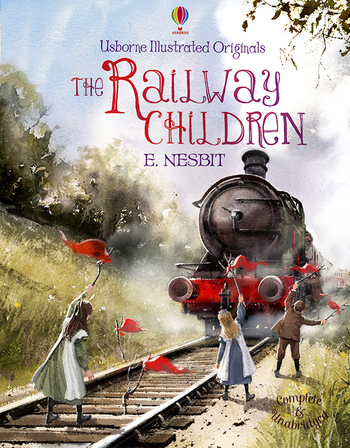 Three children, Roberta (aka "Bobbie"), Peter and Phyllis Waterbury, relocate with their mother to the country after their civil servant father is arrested on charges of espionage for the Russians. Their cottage is near the railway and they make friends with some of the people involved.

Oh, and they prevent a rail accident by use of red petticoats.

Adapted for stage and screen a number of times. The stage version performed at a new purpose-built theatre at King's Cross Station in London in 2015 featured an actual steam locomotive.

In 2021, Jacqueline Wilson published a modern take on the tale called The Primrose Railway Children, told from the perspective of Phoebe Robinson, a twenty-first century version of Phyllis Waterbury.

In 2022, a sequel film was released, which saw the return of Jenny Agutter as Bobbie, set during the Second World War (Peter is explicitly confirmed to have died, and Phyllis is referenced in a manner that leaves it open if she is dead or simply elsewhere).

Not to be confused with The Boxcar Children.