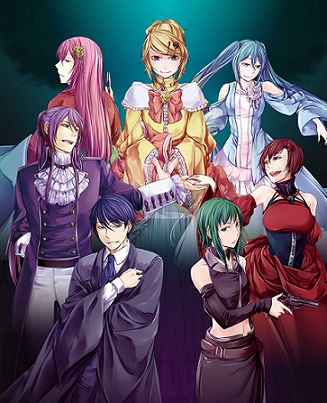 The Evillious Chronicles is a dark-fantasy multi-media franchise created by the Japanese Vocaloid producer Akuno-P, or "mothy." Although mothy started the series by releasing songs with simplistic one-picture videos such as "Wordplay" and "The Daughter of Evil", as his popularity and budget boomed he's produced more varied PVs of much higher quality and using more Vocaloids. "Wordplay", his first known Evillious song, was released in March 2008.

More than songs, mothy has conveyed the narrative of the Evillious Chronicles through light novels, databooks, short stories, mangas, poems, interviews, and cryptic tweets. The narrative as a whole concerns the fantasy continent of Bolganio, primarily its western half, called Evillious. Over a one thousand year period, the franchise covers multiple stories where people on this continent are affected by Demons representing the Seven Deadly Sins. Many stories in the franchise draw from western aesthetic, mythology, and folklore. A theatrical adaptation of the songs called The Daughter of Evil ~Gemini of Charm~ was written in 2010 by Hidekatsu Tokunaga of X-QUEST, but was made without mothy's involvement and as such differs significantly from the canon narrative. The songs "The Daughter of Evil" and "The Servant of Evil" are also prominently featured in several Vocaloid concerts and video-games.

The story of the franchise is told in anachronistic order through several intersecting song series, the most famous being the Daughter of Evil series (which was the first to get its own Light Novel series, though takes place in the chronological middle of the timeline.) The various series can be summarized accordingly:

The Daughter of Evil Series: The first series to be expanded outside of songs on by mothy, focusing on the political turmoil and strife instigated by Princess Riliane as the ruler of Lucifenia, as well as various background conspiracies. It begins around the time of Riliane's ascension to the throne, going over the genocidal "Green Hunting" against the people of Elphegort, the resulting Lucifenian revolution, and the conflicts that occurred in the aftermath. This is the centerpiece upon which the rest of the franchise was built, with the most adaptations, stories, and fan content devoted to it, taking place roughly in the center of the Evillious timeline.

The Seven Deadly Sins Series: An overarching plotline that spans throughout Evillious' history, this expands more heavily on the Demons of Sin that had a more minor role in the Daughter of Evil series. It does this through showing the exploits of other individuals possessed by the seven demons of sin, centering on their most famous and influential hosts: Lust's Duke Sateriasis Venomania, Gluttony's Duke Banica Conchita, Sloth's Marchioness Margarita Blankenheim, Envy's Kayo Sudou, Greed's The Supreme Court Director of the USE Dark Star Bureau Gallerian Marlon, and Wrath's Nemesis Sudou. Pride is the exception, as Princess Riliane Lucifen d'Autriche's life is its own series.

The Original Sin Story: The Origin Story of the entire series, detailing, among many other things, the fall of the Magic Kingdom of Levianta (a highly advanced Magitek kingdom), the origins of the seven demons of sin, and the beginning of the thousand year struggle between Elluka and Irina Clockworker. Much of it centers around Project MA, the kingdom's attempt to avert their doom by having their most powerful (female) mage give birth to the reincarnation of the dragon gods Levia and Behemo. Naturally, the project causes almost all of the problems that Evillious struggles with for the rest of its history.

The Clockwork Lullaby Series: Taking place mostly in the modern era of Evillious' history, this series focuses on a troupe of characters that live within Evil's Theater in Held's Forest, attempting to collect all of the vessels of the seven demons of sin in order to create "utopia". They are led by the Clockworker's Doll (a vessel of sin herself), following in the footsteps of her "father", Gallerian Marlon.

The Four Endings Series: A set of songs listing four "Masters" who correspond to the four "endings" fated to befall the setting at the end of the timeline: the Court, the Graveyard, the Hellish Yard, or the Heavenly Yard. Although the shortest of the song series, there's a good deal of overlap between this one and the rest, especially the Clockwork Lullaby song series and the Seven Deadly Sins Light Novel series.

The Daughter of Evil: