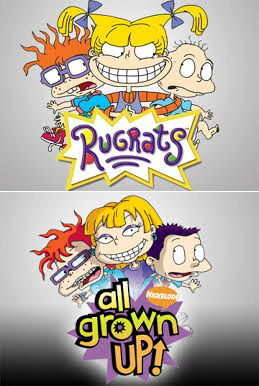 Above: Rugrats (1991)
Below: All Grown Up! (2003)
"There was a long period of time during which nothing much happened."
— The Narrator, The Bard's Tale
Advertisement:

A Time Skip is similar to the Distant Finale, but rather than coming at the end of a series, occurs somewhere in the middle, usually between seasons or Story Arcs. A Time Skip can also happen when a series gets a sequel that picks up after the Distant Finale. Naturally, this occurs far more in animated series and comics than in live action, unless a long period of time passes in real life. A mid-series Time Skip in a manga usually causes a break between series in the anime adaptation. It's also a common point in the story for filler to be fitted in.

A Time Skip also provides another advantage for animated series that isn't necessary for live-action series: after a certain number of episodes have passed it looks more and more ridiculous that the characters haven't aged. However, animation doesn't really allow for the extremely subtle effect of gradual aging. Thus, the best way to show aging has happened is to jump ahead to when they're older.

A Time Skip usually takes no less than three years, and may indicate a shift in the Competence Zone, or at least the characters' place in it. The Official Couple now has a kid, the kid sister... Wow! She Is All Grown Up! When a time skip occurs in a Shōnen anime or manga, you can bet that almost the entire cast will have Taken a Level in Badass.

Time Skips can cause/result in a dramatic shift in the tone of a series, especially if the main characters were kids or teenagers. Alternately, it can be a "The Next Generation" situation, with the children of the previous protagonists taking up the mantle of their parents. A common device of such a variation has the previous protagonists realizing that they now have to put up with the same shenanigans they put their own parents/commanding officers through.

A time skip may be used as well to link the Origin Story and the story itself, when the story does not take place immediately after the origin. Instead of using a Flashback within the main story, the story details the origin story at the beginning and provides a "many years later" screen to jump to the main story.

Tends to be used as a follow up to a Wham Episode.

Often leads to Ridiculously Successful Future Self for one or more characters.

In a story that runs on Webcomic Time, an occasional periodic Time Skip is almost a requirement to keep the time frame current with the real world. Some don't bother. Alternatively, multiple time skips can be chained together in any medium to produce a story with a larger time span at the expense of insignificant events between major plot turns — see Dashed Plot Line.

Thanks to the nature of time flowing forward and that ugly process known as "aging", live-action works can use a Time Skip to help make Role Reprises feasible in the event of a Sequel Gap.

Longer time skips tend to be a round number of years. See also: Offstage Waiting Room. And check for eyepatches. If the Time Skip is especially lengthy, see Distant Sequel.

A Time Skip that doesn't get covered in enough detail tends to be prime Fanfic Fuel.

Contrast Spin-Off Babies, which instead makes the characters younger, and Bait-and-Switch Time Skip, which only looks like a long period of time has passed.