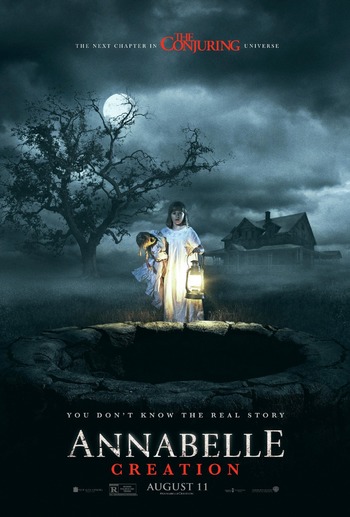 Evil has its beginnings.
"It was quiet for all these years. After Samuel and I lost our daughter, we prayed to see our girl again. The contact started small, but then, she wanted permission to move into the doll. We soon realised it wasn't our daughter. So we locked it away."
— Esther Mullins
Advertisement:

Annabelle: Creation is a horror film, that is a prequel to 2014's Annabelle, which was also a prequel to The Conjuring in 2013, and it is set like them in The Conjuring Universe. The film is directed by David F. Sandberg of Lights Out fame and was released on August 11, 2017.

The story is focused on a dollmaker and his wife, whose daughter died twelve years earlier, as they decide to open their home to a nun and several girls from an orphanage that has been closed. The dollmaker's possessed creation, Annabelle, sets her sights on two of the orphanage's children, Janice and Linda, turning their shuddered shelter into a storm of terror.

A sequel, Annabelle Comes Home, was released in 2019.

"She mustn't go near that doll!"