Literature / The Tale of Mr Tod 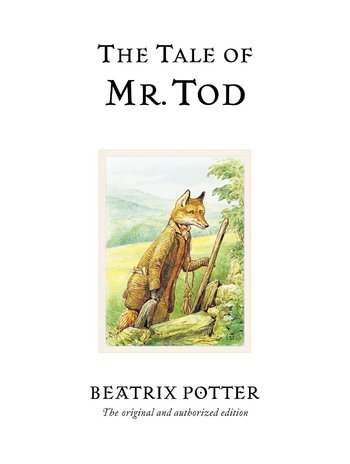 The Tale of Mr Tod is a children's book by Beatrix Potter. This is a story about not-nice people. It is about Tommy Brock, and Mr. Tod.

Mr. Tod is a fox that has many houses, and is very rarely at home in any of them.

Benjamin Bunny has a family of very young little bunnies. While he and his wife Flopsy are out, his father, Old Mr. Bouncer, who is supposed to be watching the baby rabbits, plays host to Tommy Brock, a badger who bemoans the lack of frogs, pheasants' eggs, and other game. Tommy Brock manages to steal the young rabbits while Old Mr. Bouncer is asleep, after having a cabbage cigar. Benjamin and Flopsy return to discover Mr. Bouncer asleep and the babies gone, and Old Mr. Bouncer initially denies having let anyone inside the rabbit hole. The smell of badger is too strong for either Benjamin or Flopsy to believe that, and Flopsy slaps Mr. Bouncer.

Benjamin finds Tommy Brock's bootprints and immediately begins to track him. He follows the trail to what turns out to be one of Mr. Tod's houses, but then he smells fox, hears something break, and flees. Coincidentally he seems to have followed just where Tommy Brock has gone. He notes evidence of the badger's recent passing through the area, including a mole trap and bits of a burlap sack caught on a briar. He encounters his cousin Peter, and enlists his assistance in retrieving his young. It turns out Peter saw Tommy Brock with a burlap sack, but had no idea what was in it other than it was squirming, though Tommy Brock claimed they were caterpillars.

Peter surmises that since Tommy Brock has eaten something, that Benjamin's babies are alive and the badger will probably save them for breakfast. Knowing of Tommy Brock's habit of staying in any of Mr. Tod's vacant houses, Peter deduces he's gone to the one on Bull Banks, at the top of Oatmeal Crag.

They stop by Peter's sister Cottontail's home, and she reports having watched a winded Tommy Brock rested twice in the distance while lugging the sack. Benjamin implores Peter to hurry up and continue on their way, lest they get there too late.

They make it to the fox's house on Bull Banks, and peer in the kitchen window. They see a table set in preparation for someone's supper. Then they go to the bedroom window and observe Tommy Brock in Mr. Tod's bed, and Peter remarks that Tommy Brock has gone to bed in his boots. They return to the kitchen window and try getting it open but it's too dark. When the moonlight shines into the window, they see the oven. When they shake the window, the oven door shakes. The baby rabbits are alive and shut up in the oven!

Having no way of getting in the house, the two rabbits decide to dig a tunnel in order to get inside. By the end of the night they had got under the kitchen floor. When they exit the tunnel to clean themselves off they hear a fox barking, and foolishly dart back into it.

Fortunately Mr. Tod, in the worst of humors, is not aware of their presence, due to the overpowering stench of badger. He's too busy being annoyed by having broken a very precious china plate, the state of his other homes, and a jay bird that was warning other animals of the fox's approach. He goes to his house, unlocks it, and finds the tablesetting, and then he finds Tommy Brock sleeping in his bed. He ponders beating up the badger with a walking stick and a coal scuttle, but thinks instead finally that he'll play a nasty prank on Tommy Brock instead.

Tommy Brock pretends to be asleep, all while Mr. Tod gets a clothesline, and sticks part of the clothesline out the window, then goes outside and ties the end to a tree. He trips over the tunnel made by Benjamin and Peter, but thinks it's Tommy Brock's doing. There's a hook on one end of the clothesline and he goes back in the house with a pail of water, and suspends the clothesline above the bed with the full pail of water, on the part of the bed where curtains are supposed to hang from. He goes to untie the rope from the tree, but finds it too tight, so he gnaws it with his teeth for nearly twenty minutes. When the rope finally gives way it knocks him over with the force, but he hears no screams. So, he thinks Tommy Brock is dead. He thinks of all the cleaning he will have to do, and walks back into the house, only to find Tommy Brock sitting at his kitchen table, pouring himself some tea. Tommy Brock throws the scalding hot tea all over Mr. Tod, which provokes the fox to attack him. The two combatants make a mess of the kitchen, and eventually roll out the door, still wrestling and cursing. Peter and Benjamin take the opportunity to retrieve the baby rabbits and beat a hasty retreat. They make it home, and Flopsy gives back the rabbit tobacco she'd confiscated from Mr. Bouncer for being negligent, and the old rabbit is forgiven. The baby rabbits are none the worse for wear, though hungry.