Literature / The Tale of Benjamin Bunny 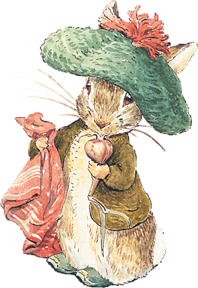 The Tale of Benjamin Bunny is a children's book by Beatrix Potter published in 1904.
Advertisement:

A sequel of sorts to The Tale of Peter Rabbit, this story is about Peter's cousin Benjamin and how he talked Peter into going back to Mr. McGregor's garden to retrieve Peter's clothes, and maybe swipe some vegetables on the way. Naturally, all does not go as planned.