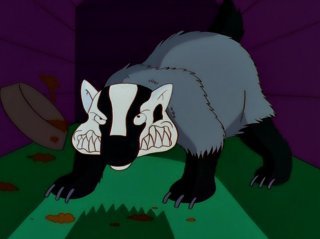 They put the "bad" in "badger".
Dr. Bobtail: Badger?
Mrs. Bobtail: No, warm. We're having carrots and celery.
Dr. Bobtail: But I mean I smell badger!
—The Tale of Mr Tod (2012 movie)
Advertisement:

In regards to mustelids being portrayed in pop culture, weasels are normally crafty and sneaky and skunks (which, along with stink badgers, are actually mephitids) are smelly. When it comes to vicious and downright aggressive, that's where badgers come in. While badgers have had both positive and negative portrayals, the negatives tend to be a lot more harsh than with weasels and skunks. This could be due to farmers' view of them since badgers can be a predator to small livestock. Not to mention their appearance can somewhat be intimidating to a lot of people.

Most of the time (but not always) villainous badgers tend to be elderly, though badgers of all ages can still be vilified. At best they are The Cynic or a Jerk with a Heart of Gold and at worst they are straight-up savage and dangerous. A grumpy badger is usually territorial and will only attack if one trespasses its environment whereas a savage badger will intentionally try to harm others, usually animals it preys on or smaller than itself. Usually the most common adversary for a badger villain to go up against are foxes and sometimes rabbits (though some forms of fiction have them getting along just fine, see The Animals of Farthing Wood).

(Even the positive badger stereotype of a steadfast Determinator is actually just a riff on the above; a good badger is one that's pointed towards the bad guys.)