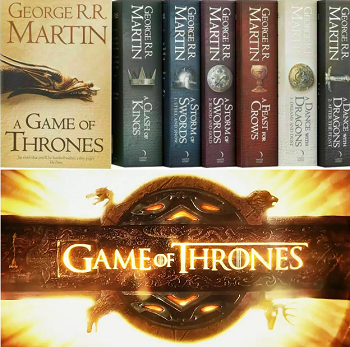 When you play the game of titles, you take one from the source material or you die.
Advertisement:

So you're trying to come up with a name for your book or series? Well, if you already have a name for its first part, why not also use it for the work as a whole?

If that segment serves as an introduction to the main character, setting, or idea of the work, then its name usually reflects the work as a whole pretty well. In the case of TV shows, the first episode might have started as the Pilot for the whole series, so it's natural that it bears the series name.

In all cases involving a single work and its components, instead of a series, the first installment is also a Title Drop Chapter.

May be a result of Numbered Sequels, where the first installment has no number, the second has a "2" on the end of it, etc. In this case, the obvious name of the series is the name of the first entry, since that's what ties the titles together. When dealing with such a series, this wiki usually lists the first entry as Namespace/SeriesName1.

Title 1 may occur in cases where the franchise is not titled exactly the same as the first installment.

Idiosyncratic Episode Naming of every entry being Character Name and the Noun Phrase and the series title being said character name, does not count, as the installments' titles are instead a play on the series title, instead of this specific version of the other way around, with the series name clearly being planned from the start.

Not to be confused with Named in the Sequel, which refers to a character who's given a name in an installment after the one they debuted in.

Please list entries on this page under the series as a whole, not the first installment of the series. When doing so:

Plays on the trope: