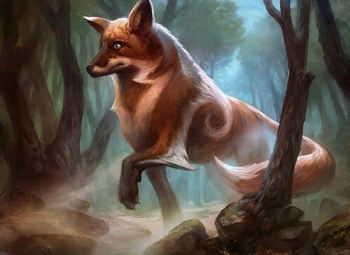 Firefox has detected a problem.
Advertisement:

Animals frequently appear in folklore and mythology, and their traits are often exaggerated or Flanderized to make a supernatural or intelligent version of themselves.

The fox is no different. Foxes are nocturnal hunters, with an eerie, haunting cry, and a reputation for almost supernatural cunning and cleverness. It's not a surprise that their mythological counterparts draw their inspiration from these traits.

These myths and legends have both appeared in altered forms in modern stories and have influenced our own view of fox traits, leading to fox Animal Motifs.

By far the best-known outside of its country of origin, the kitsune is the Japanese version of the myth. Kitsune were neutral tricksters in general, but could also be malicious or benevolent. See the main page for a full description and examples.

Kumiho/Gumiho are the Korean version of the legend. Their traditional depiction is far darker than the Japanese version, being demonically blood-thirsty and having a taste for human flesh — though in some tales they seem to just adore humans and wish to become one. It was believed that a fox that lived 1000 years would become a kumiho. Kumihos can change their form, although they nearly always retain some fox-like aspect such as paws, a tail, ears, eyes, or their voice. They were believed to eat either human hearts or human livers to survive, and some myths state that eating enough of these will allow the kumiho to become human. In other myths, a kumiho who abstained from killing and eating meat, or lived undetected with a human man for 1000 days, would lose its evil nature and become a human woman. Korean Kumihos' distinctive trait is that Kumihos tend to suck some of a man's life energy (Ki) by inserting a 'fox orb' (Yeowu-gusul) into that person's mouth via kissing (which is shown in South Korean Drama My Girlfriend Is a Nine-Tailed Fox). However, this process can also work in reverse, as any man swallowing that orb can gain some special skills (such as astrology).

Not to be confused with a lesser known fox spirit, Cheonho, which is a divine animal that supposedly protects kings. Cheonho have golden fur and possess clairvoyance, as well as one tail split into nine pieces rather than a Kumiho's nine tails.

The Chinese huli jing can be either a good or evil spirit. Like kitsune and kumiho, huli jings are shapeshifters, and often assume the forms of beautiful young women. Indeed, the Chinese believed that they were entirely made up of feminine energy (yin or jing) and needed to gather masculine energy (yang) to survive.

Evil huli jing would often seduce or possess important men in order to trick them or consume their life force (yang). They were also known to seduce or mislead the innocent away from Dharma. Good huli jing are often featured in love stories with human men.

In Scandinavian myth, the fox is a trickster, using guile to catch its prey (or just mess with others for the hell of it). It is also responsible for foxfire — the old name for the Aurora Borealis and the phosphoric light given off by decaying plant matter. There are also the Brunnmigi, foxlike creatures sometimes referred to as trolls, that are known for tainting water. While the Skuggabaldur of Iceland is a fox-cat hybrid that can kill with a glance and can only be slain with silver blades.

The Celts believed that every individual and clan had an animal ally, similar to Native American Mythology of totem animals. The fox, called Madadh-Ruadh or Sionnach, is cunning, sly, and able to make fools of those who chase it. It also represents the ability to watch the motivations and movements of others while remaining unobserved yourself.

The word shenanigan is thought to be derived from the Irish expression sionnachuighim, meaning "I play the fox."

Reynard is an anthropomorphic fox that appears in multiple European fables as a trickster. In basically all non-censored versions he plays the role of a black-hearted robber baron, whose only saving grace is that his opponents Noble the lion, Bruin the bear, and (most of all) Ysengrim the wolf, are equally greedy and vicious, but not as smart. He's well enough known in France that the entire Fox species was renamed after him.

Foxes were regarded as tricksters in Native American Mythology, similar to how Coyote was viewed.

Foxes, like most animals in Native American Mythology, could speak and were believed to be able to remove their fur and become women, often in order to trick a human into believing that they, themselves, were human. Stealing the fur would prevent them from returning to their fox form.

See Cunning Like a Fox and Foul Fox for Animal Stereotypes associated with foxes and Asian Fox-Spirit for East Asian mythological traditions, as well as Those Wily Coyotes for another wild canid often seen as a trickster figure in mythology. See also The Fair Folk, Beast Man, and Fox Folk.

While an Inuit myth, the story of the Fox Wife hits the similar points of a magical fox that shapeshifts into a human and marries someone.

While an Inuit myth, the story of the Fox Wife hits the similar points of a magical fox that shapeshifts into a human and marries someone.