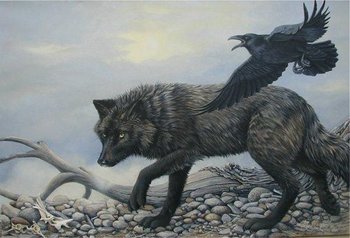 Coyote and Raven
"I'm a culture hero. We're like gods, except we screw up a lot more and nobody worships us."
—Whiskey Jack, American Gods
Advertisement:

Writers who are thinking of incorporating these myths into their works should be aware that some Native Americans feel that a form of "cultural copyright" exists on their traditional stories, and may object to them being used by someone from outside their tribe or culture, especially if those stories are still part of a sacred tradition. Also, as noted above, these are a wide range of cultures, so please think twice before you have a Comanche talk about the Wendigo.

Related to these is Siberian Mythology, with thousands of years worth of cross pollination across the Bering Strait.

If you are familiar with specific mythology besides those six, then feel free to create a page for it.

Other Tropes which may be found in various stories include: