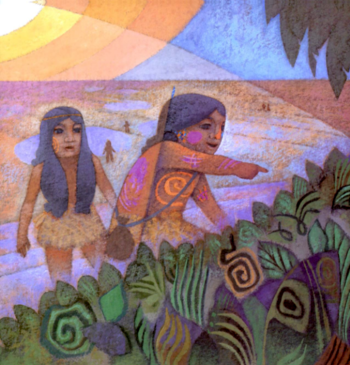 The Taíno were an indigenous people of the Caribbean. Until Spanish colonizers began traveling to the islands in the 15th century, they were the main inhabitants of The Bahamas, Cuba, the Dominican Republic, Haiti, Jamaica, the northern Lesser Antilles, and Puerto Rico.

The Taino worshipped deities and ancestral spirits called zemi (also written as "cemi"). Zemi were housed in sculptures sculpted from a wide variety of materials, including wood, clay, sandstone, bone, shells, and stone. Medicine people could consult zemis for healing and advice. During these consultation ceremonies, images of the zemi were sometimes painted or tattooed on the body of a priest (who was known as a "Bohuti" or "Buhuithu"). While Zemi are most associated with the Taino, they were also created by indigenous South American cultures.