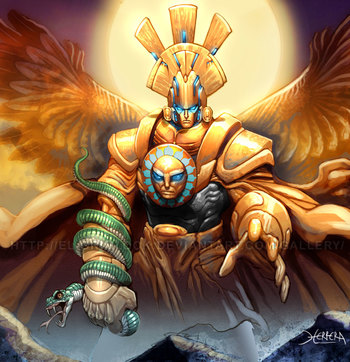 Like their Mesoamerican counterparts, Andean cultures also tend to be poorly understood. Despite that, their beliefs are radically different and actually more in syntony with European sensibilities. The most important part of the myths tend to concern the foundation of the empire and the emperors, who were known as Sapa Inca (Sapa means "Great" in Quechua).

For information on other cultures in the region, see:

One important thing regarding Inca society is that "Inca" is not actually the name that they used to refer to themselves. The actual name of the empire is actually Tawantinsuyu ("The Four Realms") while Inca (Inka) actually refers to the ruling class of the empire.

While the Inca had various deities that they worshipped, the one that tends to be considered to be most important is Inti, the Sun God. The Sapa Inca claimed descent from him.