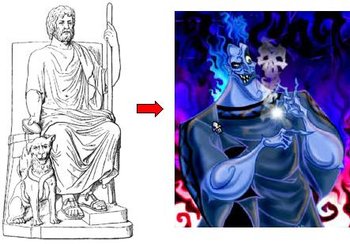 Left: Hades, from Classical Mythology.
Right: Hades, from Disney's Hercules.
"Oh and you think I enjoy this? I'm sick and tired of always being the bad guy! What I do has to be done!"
— Death, Family Guy
Advertisement:

So, by default, anything associated with death can't be good, right? And since Bad Guys Do the Dirty Work, a god who brings death must be an evil one, right?

Many religions throughout history have produced deities who rule over and/or represent some aspect of death (or destruction) and are not portrayed as being malicious. They're not evil, they're just doing their job. Those dead souls won't collect themselves.

Of course, that doesn't stop some modern writers from looking upon these otherwise benign beings and seeing nothing but an easy villain for their mythology-based opus. After all, who cares about accuracy? Viewers Are Morons after all, and most people see death as something to loathe and fear anyway, so half the work is already done! And then there is the whole Satan analogue; cultural myopia leads some in Christian-dominated America to expect that Hades is just the Greek version of the devil, when actually he's more of a cross between Saint Peter and God.

It's also quite possible that they simply didn't know better. Or were limited by time constraints and had to do something with what they had on the fly.

To put it simply, this trope is invoked whenever an author takes an otherwise benign or at least neutral death-related deity and makes them evil for whatever reason.

A Sub-Trope of Sadly Mythtaken and Demonization, and a form of Adaptational Villainy. Compare with Satanic Archetype and Hijacked by Jesus, when the similarities with Christianity are painfully obvious. Contrast with Don't Fear the Reaper and Everybody Loves Zeus. See Historical Villain Upgrade for when this is applied to historical rather than mythological figures. See also The Theme Park Version and occasionally Mythology Upgrade.

Named after the Greek God of the Underworld, Hades, who is often a victim of this in modern times. Has nothing to do with the public reception of a certain action roguelike made by Supergiant Games.