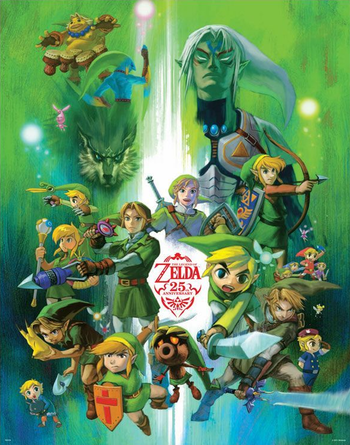 No matter what, there will always be a Link to save the day.
"I have been Roland, Beowulf, Achilles, Gilgamesh. I have been called a hundred names and will be called a thousand more before the world goes dim and cold. I am a hero."
— The Security Officer (maybe), Marathon
Advertisement:

Many cultures have the idea of an eternally recurring hero. Not a King in the Mountain, just a hero who keeps coming back for more. Maybe it's one hero with multiple identities. Either they're immortal, or there's an element of returning from being apparently dead or seeming way too old to fight. The reason both are included is that this trope is as old as mythology, and in its early era the concepts of The Ageless, resurrection, and absurd longevity were fairly interchangeable.

A character could become an Eternal Hero for many reasons. Maybe, like the Irish legend Osinn in Tír Na nÓg, the hero ends up in a time loop or Neverneverland that allows him to return to Earth centuries later without having aged. Maybe he's just unkillable. Sometimes, a deity or other force of nature embodies itself as this character whenever the world needs it. For the Norse, J. R. R. Tolkien argues that it's Sigurd/Siegfried. For the Celts, it's the many permutations of Fionn and the Fianna and the Red Branch Knights.

Supertrope for The Hero with a Thousand Faces, the King in the Mountain and the Legacy Character as well as many heroic archetypes. Sister Trope to Immortality.