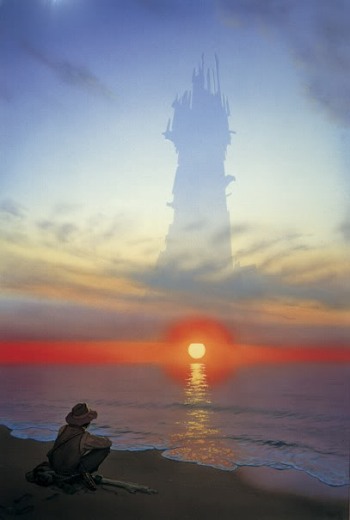 "Go then, there are other worlds than these."
"The man in black fled across the desert, and the gunslinger followed."
Advertisement:

So begins The Dark Tower, Stephen King's epic long-runner, a series of seven books published over nearly thirty years. The series is frequently regarded as King's defining work. It is a long and complex Mix and Match of Speculative Fiction, High Fantasy, Horror, Postmodernism and Westerns.

A series of prequel comics, initially adaptations of flashbacks in the novels and now original stories, are ongoing from Marvel Comics.

The story begins in a Scavenger World After the End. Roland Deschain, Gunslinger of Gilead in the Barony of New Canaan, is pursuing a mysterious man across the desert, to get information about the eponymous tower. Roland himself begins as an enigma — for about the first third of the first book, he's referred to in the narration only as "The Gunslinger". As the series goes on, we learn more about him, his world, and what drives him on his quest.

Roland is the last gunslinger, a sort of knight with revolvers, as well as the last survivor of his lineage, his city, and his kingdom. It's not really clear, even to him, how long it's been since Gilead fell and he began pursuing the Dark Tower. The very world he lives in, called Mid-World, seems to be unraveling — even compass directions and the passage of time are not reliable. "The world has moved on," as they say.

He learns that to continue on to the tower, he must pull a select group of people from our world, including a lonely young boy, a heroin addict, and a woman with two personalities — one a civil rights and peace activist, the other a violent psychopath. And that's when the journey really begins.

The series is inspired by Robert Browning's poem "Childe Roland to the Dark Tower Came".

The series had been in Development Hell for over a decade trying to get it to screen/television, with Ron Howard being involved at one point. As of November 2016, Idris Elba and Matthew McConaughey have been cast as The Gunslinger and The Man In Black respectively, endorsed by King. The page for the film can be found here.

Unspoiled readers should use caution when reading this article. Although the later and more major spoilers are blocked out, events from the first four booksnote The Gunslinger, The Drawing Of Three, The Wastelands and Wizard and Glass can and will be unmarked.

Now with a new and much improved character page. Please feel free to add to it.

This series is not to be confused with the unfinished book in C. S. Lewis's Space Trilogy, also called "The Dark Tower".

To see tropes about the individual books in the series, please check out their individual pages above.