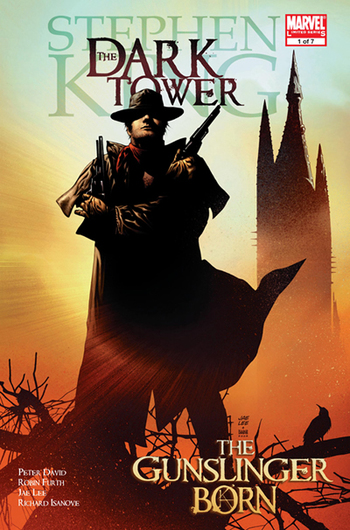 Started in 2007, The Dark Tower is a series of comic books based on Stephen King's The Dark Tower series of novels, plotted by Robin Furth and scripted by Peter David, with King serving as Creative and Executive Director of the project.

Originally published by Marvel Comics (and later republished by Gallery 13), the series initially serves as a prequel-series to the novels, recounting the story of a young Roland and his original ka-tet and concluding with the tragic battle of Jericho Hill. This would be followed up by adaptations of the first two Dark Tower novels, The Gunslinger and The Drawing of the Three. There were initially plans to continue the series with adaptations of the remaining novels, but any future comics were effectively cancelled when Marvel lost the publishing right in 2017.

As of 2018, publishing rights for the series have switched to Gallery 13, with all previous volumes seeing rereleases, though it is still unknown if there are plans to continue the series.

The series was split up into a number of miniseries, one-shots, and guide books: