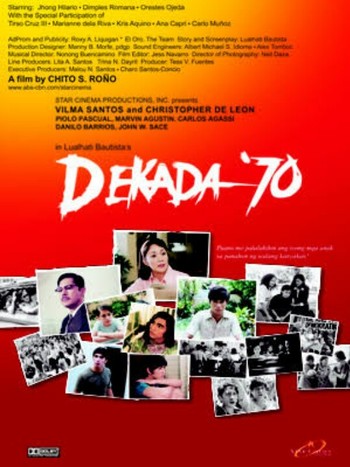 Pronounced Dekada Sitenta, this Filipino novel was written in The '80s by author Lualhati Bautista, depicting the struggles of a typical Filipino family trying to survive the Martial Law regime under the dictator Ferdinand Marcos, which defined most of The '70s in the Philippines, for which the novel is named. The novel revolves around the five-child, solidly middle-class, Manila-based Bartolome family, headed by the conservative breadwinner Julian, and Character Narrator Amanda, who has to balance her role as disciplinarian to her five sons with an inner feminist spirit encouraging her to find work—to support the family, yes, but also for her own sense of fulfilment.

This was the Philippines' entry for Best Foreign Language Film in the 76th Academy Awards. A theatrical musical adaptation was released in 2020.

Compare Mass, which also critiques the Marcos regime and the imperialist U.S. support of it—but notably, it does this already before the declaration of Martial Law in 1972. Fun fact: Lualhati Bautista herself translated Mass into Tagalog.