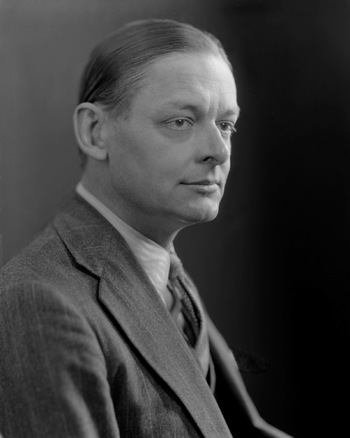 I have heard the mermaids singing, each to each.
I do not think that they will sing to me.
Advertisement:

Thomas Stearns Eliot OM (26 September 1888 – 4 January 1965) was an American-born English poet, essayist, playwright, and literary critic. Considered one of the 20th century's major poets, he is a central figure in English-language Modernist poetry. The Waste Land is his most famous poem.

He was born on 26 September 1888 in St Louis, Missouri to Henry Ware Eliot (1843-1919), a successful businessman; and Charlotte Champe Stearns (1843-1929), a poet and social worker, then a new profession in the US during the early 20th century. The Eliots were a Boston Brahmin family (members of Boston's traditional upper class). Eliot was the last of six surviving children. Known to family and friends as Tom, he was the namesake of his maternal grandfather, Thomas Stearns.

He lived in St Louis for the first 16 years of his life, during which he developed an infatuation with literature. He soon entered Harvard University in 1906, attaining his M.A. in 1910. He then moved into the Sorbonne and stayed there for a year. He then returned to Harvard to pursue a doctorate in philosophy, but left before getting the degree; he returned to Europe and settled in England in 1914. The following year, he married Vivienne Haigh-Wood and began working in London, first as a teacher, and later for Lloyd's Bank.

It was in London that Eliot came under the influence of his contemporary Ezra Pound, who recognized his poetic genius at once, and assisted in the publication of his work in a number of magazines, most notably The Love Song of J. Alfred Prufrock in Poetry in 1915. The literary friendship between the two would remain an important influence on Eliot.

From 1917-1919, Eliot edited the "little" magazine Egoist. During that time, he published his first book of poems, Prufrock and Other Observations, was published in 1917, and immediately established him as a leading poet of the avant-garde. In 1922, he founded the Criterion, a quarterly review of literature and philosophy, which he also edited, al whil working as an editor and director for Faber & Faber Ltd. It was in the October 1922 issue of the Criterion that he published The Waste Land in 1922, now considered by many to be the single most influential poetic work of the twentieth century. Eliot's reputation began to grow to nearly mythic proportions; by 1930, and for the next thirty years, he was the most dominant figure in poetry and literary criticism in the English-speaking world. In addition, he became a British subject in 1927 and was confirmed in the Church of England, his religious beliefs influencing and finding reflection in his later poetry and other writings.

T.S. Eliot also achieved eminence as an essayist writing on literary criticism, social, philosophical, and theological issues and as a playwright with such works as Murder in the Cathedral (1935) and The Cocktail Party (1949). He received the Nobel Prize for Literature in 1948. He died in London on January 4, 1965.

Other works by Eliot provide examples of: