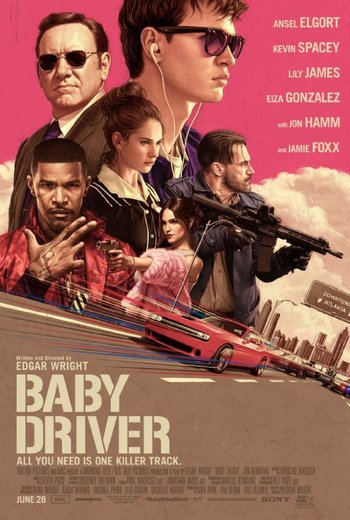 "And I was born on a dark gray morn with music humming in my ears..."
"You are the music while the music lasts."
— T. S. Eliot
Advertisement:

Every scene in this movie is driven by music.

Baby Driver is a 2017 action film written and directed by Edgar Wright.

Unlike what the title and the director's previous body of work (such as the Blood and Ice Cream Trilogy) might suggest, this is not a tightly-tuned comedy, but rather a tightly-tuned action crime drama (though Wright's Signature Style of comedy still leaks through).

Ansel Elgort plays Baby (B-a-b-y Baby), a young Getaway Driver whose affinity for always listening to his iPod while he drives makes him extremely skilled at his job. He has a tragic past working for a crime boss (Kevin Spacey) and his gang of bank robbers, and when he meets and falls in love with an innocent waitress (Lily James), he finally has a reason to leave the criminal world.

But, as is the reality with these sorts of movies, getting out is going to take a lot more than just a fast car.