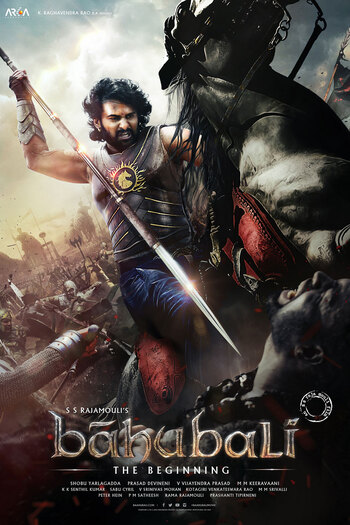 Baahubali is a duology of Indian Telugu/Tamil High Fantasy Epic Movies, consisting of 2015's Baahubali: The Beginning and 2017's Baahubali 2: The Conclusion. The franchise also consists of two prequel television series and novels.

Shiva / Shivudu is a young man who was found as an infant by his adopted parents. He lives a carefree life until he finds a band of rebels who reveal his destiny. You see, Shivudu is really Mahendra Baahubali, the son of the former king of Mahishmati, who was usurped by the tyrant who killed him. Mahendra then goes on a quest to both avenge his father and take his rightful throne. Interposed throughout the films are extended flashbacks to the tragedy of the king's fall.

Has nothing to do with the first tirthankara of Jainism.