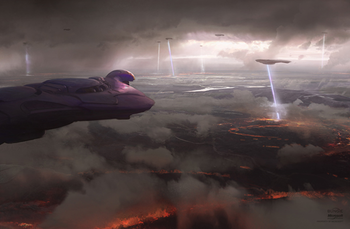 "Your world will burn until its surface is but glass."
"We will fill their wells. We will burn their fields. We will destroy their trees. WE WILL TURN THEIR LAND BROWN!"
— Marshal Graziani, Lion of the Desert (1981)
Advertisement:

Salting the earth is an act to curse the land and render fields incapable of crop growth, often used in ancient times as a symbolic act on top of various other scorched earth tactics to indicate the desire of the victor to completely eradicate the enemies' ability to reconstruct themselves after the war, or by those being forced into retreat to ensure that their would-be conquerors would have to put more effort into rehabilitating the land if they won.

So as a trope, characters will often have an analogous action, sometimes literally salting the earth, which performs as a symbolic act to indicate their embrace of scorched earth tactics and the increase of hostilities beyond it. The act can be a movement across the Moral or Despair Event Horizons, increasing the threat of a character, making the stakes truly a matter of survival and making the lack of forgiveness or remorse clear. So it is that the act can occur at a pivotal moment in the middle of a war or as the final blow at the end of one.

The action was common in the ancient Middle East and extended to the Middle Ages. The thing to note, though, is that salt was costly then. Wars and revolutions started because of it. Heck, even now a bad winter can give us difficulty in getting salt supplies out to spread on the roads. So in these tales, look at salt as not just something bad for the crops but also as something with attributed mystical powers and that you probably aren't going to spread over an entire field, leaving just the corner of some garden being ploughed for the symbolism of it. They knew their tropes, even then.

Enough salt will decrease the fertility of the land. This was discovered first in Mesopotamia, when salts left from irrigation reduced fertility enough that whole civilizations collapsed. Unlike the symbolic versions practiced by the Romans, this involved centuries of salt deposits building up.

In works set in the modern era, the equivalent is intentionally spreading radioactive material to render an area uninhabitable. The sci-fi version is "glassing" a planet, raining down enough Death from Above that there's nothing left of the surface but scorched glass.

Related to Kill It with Fire and Death from Above. Compare There Is No Kill Like Overkill. Subtrope of Salt Solution.