Literature / The Eagle of the Ninth 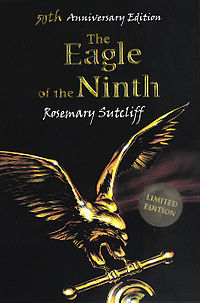 Sometime about A.D. 117, the Ninth Legion, which was stationed at Eburacum, where York now stands, marched north, and was never heard of again.
— Excerpt from the introduction
Advertisement:

A Rosemary Sutcliff historical novel published in 1954 about a young Roman soldier named Marcus Flavius Aquila who goes on a quest to find the eagle standard of his father.

, which disappears from the historical record after having last been mentioned as present in Scotland in the early 2nd century. This book sets up later novels featuring descendents of the protagonist.

The film The Eagle (2011) is based upon this novel, but the earlier (1977) BBC TV series (titled The Eagle of the Ninth) is a more faithful adaptation (perhaps because the 2011 film omits some characters and events for the sake of brevity).

This book (and the 1977 TV series) provide examples of: