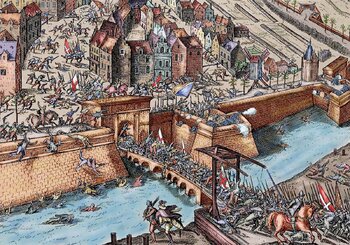 The sack of Antwerp (November 4, 1576) by Spanish troops during the Eighty Years' War
"I can not approve that monarchs desire to rule over the conscience of their subjects and take away from them their freedom of belief and religion."
—Rebel Leader William of Orange
Advertisement:

The Eighty Years' War, or the Dutch War of Independence (1568-1648), was a war fought, as the name suggests, over the course of eighty years and for the independence of the Dutch Republic (a precursor to the modern-day Netherlands) against the the western/'Spanish' Habsburg realms. The leaders of the rebellion cited the strict control of the monarchy over the people as their main incentive to rebel, mainly in terms such as freedom of religion and thought and the matter of taxation. More cynically-minded observers generally put the taxes first.

The event that is said to have set off the revolution is the public execution of the statesmen Lamoral, Count of Egmont and Philip de Montmorency, Count of Hoorn, on the main square in Brussels on June 5, 1568. The two were executed for their resistence to the founding of a Castilian-style Dutch Inquisition that would probably be used to weed out opponents of the monarchy much as in Castile and Aragon. William the Silent then became the leader of the rebellion and managed to escape execution using charisma and political intelligence until he could go into hiding, though he was later assassinated by a spy.

Subsequently, the Dutch revolt would break out in 1567 leading to the rise of William of Orange. Under his command hostilities between the Dutch Republic and the Spanish Habsburg realms. The conflict would manifest as multiple skirmishes, minor battles, and incredibly long and tedious sieges — most of which went nowhere.

The Dutch Republic was finally given some recognition when the two belligerents contracted the Twelve Years' Truce in 1609. The peace lasted until 1619 when the Thirty Years' War broke out, returning the Dutch Republic and the Spanish Empire to opposition as the Dutch intervened. With the resolution of the Thirty Years' War, the Dutch gained French allies who aided them in a defense against the Spanish. With the Spanish forces spread far and thin they eventually were cut off from home. Peace negotiations began January 1646 which eventually lead to a peace agreement.

The war was followed by a slight upheaval of the Dutch Republic's political system. The Spanish Empire's reputation was greatly hurt by the loss, but persevered nonetheless. The war also had little effect on the Spanish-Portuguese war.

The Other Wiki has a incredibly extensive and more specific article on the Eighty Years War. See also the Thirty Years' War and The Dutch-Portuguese War.