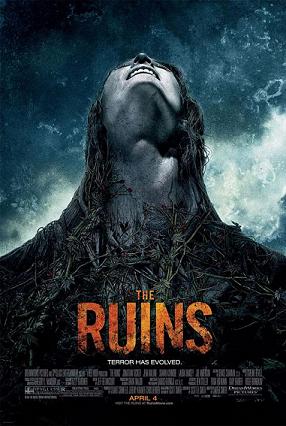 They grow on you.
Advertisement:

The Ruins is a 2008 film based on a novel of the same name by Scott Smith produced by Ben Stiller, and starring Jonathan Tucker, Jena Malone, and Laura Ramsey.

Two young American couples (Jeff and Amy along with Eric and Stacy) vacation in Mexico. At the pool of their hotel, they make friends with a German tourist, Mathias, and decide to help Mathias look for his brother, Heinrich. Heinrich has met a female archaeologist and followed her to an archaeological dig at a remote Mayan ruin in the jungle. The next morning Jeff, Amy, Eric, Stacy, Mathias and Demetri (a Greek tourist they also met at the hotel) begin the journey by bus.

The location of the ruin is shown on a crude map Heinrich drew before departing. After a long ride, the group arrives at a remote village near the dig and takes a worn-down taxi to the destination marked on the map. The driver tries to warn them away from this particular area. But shortly, they arrive at the trail head where they spot Heinrich's jeep and proceed.

Upon arrival, Mayan villagers appear with guns and bows. When Amy accidentally steps into vines covering the ruin, the Mayans aim their weapons at them. Demetri tries to calm the situation by walking over to Amy and grabbing the camera which he thought was the cause of the problem. After stepping into the vines and taking the camera he begins to walk towards the Mayans. Then he is struck with an arrow in his shoulder and then shot in the head. The Mayans then force the others up to the temple roof. They soon realize they are being quarantined, and learn the reason why - something truly horrifying is making its home there, and the Mayans don't want to let it escape.

This film and novel contains examples of: