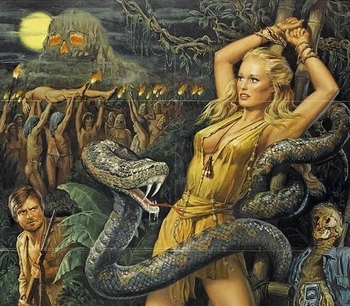 What a nice vacation spot.
You know where you are?
You're in the Jungle, baby!
You're gonna DIE!
— Guns N' Roses, "Welcome to the Jungle"
Advertisement:

If you thought the north was bad, you haven't seen the south. Down there, everyone is crude, their language indecipherable, and their mannerisms barbaric. The land itself is an inhospitable jungle full of wild beasts, barren desert, or nasty swamps full of snakes and crocodiles (sometimes it has all of the above). Also, don't go swimming: there are sharks, or worse.

The Savage South is when a southern area is seen as more barbaric than its northern counterpart. This shows up frequently in westerns, fantasy settings, horror films, Jungle Opera, and many other works and takes many forms. In milder versions, the area's just unpleasant with rude, poorly groomed people. At worst, the people are hostile to any outsiders and the land itself is a nightmare realm just waiting to kill unlucky travelers.

A Supertrope of the Deep South, South of the Border, Darkest Africa, Sinister Southwest, and Land Down Under, sister trope to Grim Up North. If the South is looking decayed, misty, and/or possibly undead, then it's Southern Gothic instead. Go even farther south, and you're in Mysterious Antarctica. See also North Is Cold, South Is Hot.

This trope may have its origins in the Punic Wars and Roman perception thereof. Hannibal Barca spent ten long years ravaging the Roman countryside, handing the Roman army some of the most one-sided defeats in the history of warfare, rewriting the entire book on tactics. The wars ended with a Roman invasion of Africa and the complete destruction of Carthage, who had been Rome's greatest rival for many decades. In Roman literature thereafter, the south would inevitably be associated with the "savage" homeland that produced such figures as Hannibal.

Later, the Age of Exploration and the adventures of European sailors, conquerors, traders, explorers, and colonists, would cement this trope in the modern mind. Europeans typically found Africa, South America, and lands further afield to be hot, wet, filled with strange and possibly hostile natives and wildlife bordering on monsters — to say nothing of the horrors of exotic diseases and in many cases, the horrors of European diseases shared with the native inhabitants, which the immune explorers would have hardly associated with themselves.

The field equipment of any self-respecting European or American in places beyond the tropics would include the venerable pith helmet — before World War II, plenty of Real Life people were fully convinced that a European head would boil in the midday sun without, while the natives were genetically adapted to it. It had a more mundane explanation: while the people who had grown in hot climates would know better and stop all physical activity from around 11 AM to 6 PM, Northerners would insist on their usual work schedule from their home country, with most active hours when the heat is worst. Expect the resulting heatstroke to be referred to as Brain Fever.

No "real life" examples unless very specific, please. For example, quoting an American newspaper saying that Mexico is barbaric is fine (despite the Unfortunate Implications), but saying "how America views Mexico" is not enough.