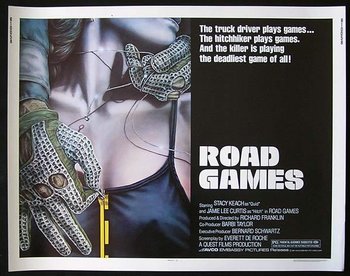 Road Games is a 1981 Australian thriller directed by Richard Franklin.

Eccentric trucker Pat Quid (Stacy Keach) is dispatched to drive a load of pig carcasses to Perth. As one of many “games” he plays to entertain himself on the long road trips, he gives nicknames to fellow drivers and hitchhikers on the road, and guesses at their occupations and stories from clues he sees.

When Pat learns that severed body parts of young women have been turning up in various locations, however, he suddenly realizes from what he’s seen of a man driving a green van (Grant Page) that the man may be the killer he calls “Smith or Jones”. The stakes get higher when Pat picks up and grows close with “Hitch” (Jamie Lee Curtis), a young woman hitchhiking away from an unpleasant family situation, and she becomes a possible target of the killer.