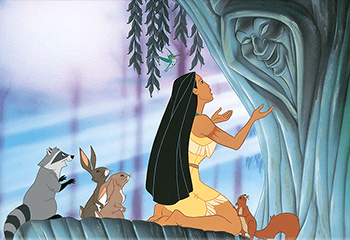 "107. Arbor Day Rule: At some point, you're going to have to talk to a tree and do what it says."
— The Grand List of Console Role Playing Game Clichés
Advertisement:

Trees are useful. They provide us with fruit, shade, wood, paper, oxygen, and many other things we couldn't live without. Some trees offer knowledge.

The Wise Tree is always willing to help the Hero out. Sure, it might not be able to fight, but what it lacks in power, it makes up in eloquence. It is often more than willing to teach others the ways of the world, stories of the ancient past, or the villain's weakness. It's not often explained just how it knows so much, but it's usually because they are older than time itself.

Wise Trees are almost always on the side of good. On occasion they may be True Neutral, simply choosing not to get involved with the conflict.

Naturally a Justified Trope since particularly large trees tend to be exceptionally old, and age equals wisdom or, at the least, experience and knowledge. Plus, inasmuch as unless you are going to have walking trees, then a tree character isn't going to be able to contribute much physically or materially, and so their importance will rely on their contribution in knowledge and wisdom. Vice-versa, if a writer wants a character who dispenses wisdom but doesn't actually get involved, then making them a Wise Tree is a good justification for them not lifting a hand to help.

Oftentimes, these trees will have faces in their trunks, giving them a direct means of talking with others.

May sometimes overlap with The Mentor, Genius Loci or World Tree. Related to The Owl-Knowing One. A type of Nature Spirit and Plant Person. This often overlaps with Treants, which are often depicted as extremely old and wise beings.