Slavery Is a Special Kind of Evil 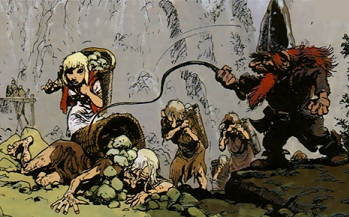 Deliver us to the promised land!
Captain Love: Ignore him, he's a common thief.
Three-Fingered Jack: Ha! As common as they come, but I ain't nothin' compared to you "gentlemen". I steal gold, I steal money, but you? You steal people's lives. So damn ya! And damn the horse that brung ya!
— The Mask of Zorro
Advertisement:

as a system under which people are treated as property to be bought and sold, and are forced to work. It's not just bad: it's literally treating them as less than a person — and barely better than cattle — for the sake of having a servant you don't have to put on a payroll. And, naturally, this practice opens the door for many other horrible things to be done to the souls unfortunate enough to be enslaved.

In many works, owning or otherwise dealing in slaves is treated by either the protagonists and/or the narrative as a qualitatively different level of evil than "lesser" crimes. In these works, a Well-Intentioned Extremist or Punch-Clock Villain may be offered the opportunity for a Heel–Face Turn even if their crimes include murder or puppy-kicking, but a slaver will NEVER be redeemed because their crimes are just too horrible, and Laser-Guided Karma will always find them. Even other villains will recoil from the monstrousness of their crimes.

In short, these works or characters treat slavery as a Special Kind of Evil.

Some works and characters will draw a distinction between chattel slavery (applying principles of property law to humans and other sapient beings, allowing them to be formally owned, bought, and sold) and other systems of forced servitude such as debt bondage, Indentured Servitude, Prisoner's Work, serfdom, etc., while others will consider all of them equally heinous and dismiss such distinctions as hair-splitting. For the purposes of this trope, either attitude counts as a valid example.

In classical international (admiralty) law, a category exists called hostis humani generis, that is, enemies of all mankind, whose behavior places them totally outside all forms of legal protection, and leaves them liable to attack, capture, and destruction by anyone at all with the ability and desire to carry it out. The category was originally defined to include solely pirates but was later extended to include slavers as well as these were far from mutually exclusive professions, quite the opposite in fact, and the transition from classical to modern international law has thus far preserved the designation. Legally speaking, then, slavery is indeed, quite literally, a special kind of evil. Of course this goes first and foremost for those who make a profit in life out of taking away other people's freedom and less so for slave-owners who are raised in a slavery-based society and who may or may not be cruel to the slaves themselves.

Compare Rape Is a Special Kind of Evil, which depicts rape rather than slavery as a more heinous form of evil. Note that it's unimportant whether a particular example of this trope depicts slavery as more or less evil than rape in particular, or even deals with rape at all; what's important is that slavery is depicted as qualitatively worse than other, "lesser" forms of evil. Both tropes can (and sometimes do!) exist within the same work, particularly when dealing with sexual slavery, which is the effective combination of both of these tropes.

Contrast Happiness in Slavery and Sympathetic Slave Owner, where (at least in-universe) the slave-owner in question isn't such a bad guy after all.