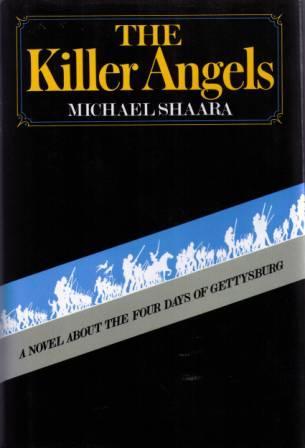 "Well, boy, if [man]'s an angel, he's sure a murderin' angel."
"This is free ground. All the way from here to the Pacific Ocean. No man has to bow. No man born to royalty. Here we judge you by what you do, not by what your father was. Here you can be something. Here's a place to build a home. It isn't the land—there's always more land. It's the idea that we all have value, you and me, we're worth something more than the dirt. I never saw dirt I'd die for, but I'm not asking you to come join us and fight for dirt. What we're all fighting for, in the end, is each other."
— Colonel Joshua Lawrence Chamberlain
Advertisement:

The Killer Angels is a famous 1974 novel written by Michael Shaara about the Battle of Gettysburg. It is written from the perspective of several commanders, including General John Buford and Colonel Joshua Lawrence Chamberlain on the Union side, Generals James Longstreet and Robert E. Lee on the Confederates, with single chapters for a Confederate spy named Harrison, General Lewis Armistead, and British observer Arthur Fremantle. The story covers the three-day battle from the perspective of these characters and explores their motives for fighting, their loyalties to whichever cause, and the humanity and hell of the war.

The novel became hugely influential in the popular perception of the Civil War, winning a Pulitzer Prize, gaining accolades from military historians, and inspiring Ken Burns' famous documentary on the entirety of the war. In 1993, The Killer Angels was adapted into the film Gettysburg, which was very faithful to the source material. Although Shaara died in 1988, his son Jeffery continued his work in the prequel novel Gods and Generals and a sequel, The Last Full Measure, using his father's characterizations.